Login + Create my blog
<< How to Obtain Elements--Lithium How to Make a Homemade Washer... >>

How to Make Copper(II) chloride

Warning: Copper(II) chloride is toxic. Do not eat the crystals or drink the solution. Avoid getting the acidic solutions on your hands or face. To be safe, wear gloves and goggles. Keep crystals out of reach of children, unless they have extreme copper deficiency and need the copper (do not take this last sentence seriously).

This article will describe several processes that can be used for creating this chemical. 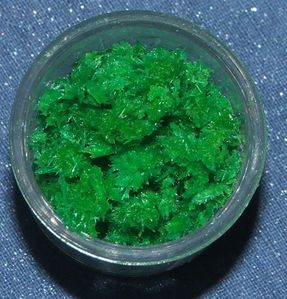 This copper(II) chloride will be used in later experiments.

Published by LanthanumK - in Experiments
write a comment …
<< How to Obtain Elements--Lithium How to Make a Homemade Washer... >>

P
Pierre
12/14/2017 15:07
Thanks for this :)<br /> About the copper carbonate method : it's very easy to obtain copper carbonate by reacting sodium carbonate and cupric sulfate, which are both readily available.<br /> Simply mix 50/50 both powders and add water, let it react for a couple hours then add more water, stir well and let the insoluble copper carbonate get to the bottom of the glass, take out the water, repeat the process until the water is clear, filter or evaporate and you'll have lots of copper carbonate :)
Reply