As I had stated in an earlier post, I have compiled a list of sources for the elements that are available to the amateur chemist. Lithium will be discussed here.

Lithium is a soft, malleable, gray alkali metal. It tarnishes to purple, then black, then white in air. It reacts with water, releasing lithium hydroxide solution, steam (from the heat of the reaction), and hydrogen gas. Lithium is the lightest metal, about half as dense as water. Lithium burns in air with a brilliant white flame, making lithium oxide, which produces a crimson flame color. Ltthium is the only alkali metal easily accessible by amateur chemists.

In element form: Lithium is found in Energizer Ultimate Lithium batteries. These are difficult to open and easy to short circuit. Lithium is also found in the CR-xxxx series of coin cells. After peeling back the cathode, the manganese dioxide and the separator paper is removed, exposing a slice of lithium metal. Lithium can be preserved in petroleum jelly.

In compound form: Lithium reacts with water to make lithium hydroxide, which after exposure to air precipitates lithium carbonate if it is concentrated enough. Lithium ion batteries contain lithium compounds. Some piezocrystals are made of lithium niobate. Lithium grease is made from lithium stearate, a lithium soap.

This is one of my pieces of lithium. It is stored in a container of petroleum jelly. Since some oxygen is present in petroleum jelly, it has turned black. Below this is a picture of a lithium chunk that has been set out to oxidize. It has disintegrated into crumbly lithium carbonate. 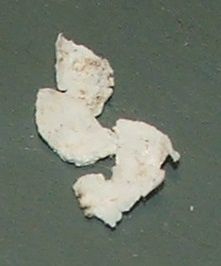